The District receives the majority of its power and energy from Nebraska Public Power District at 14 delivery points. The 34.5 kV and 69 kV transmission system is arranged to interconnect between the major delivery points and provide for reliability of power supply and flexibility of system operation. Norris Public Power District serves a total of 48 communities at retail service and five communities at wholesale service. 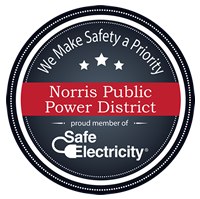